Deciphering Gen Z: The State of the Generation 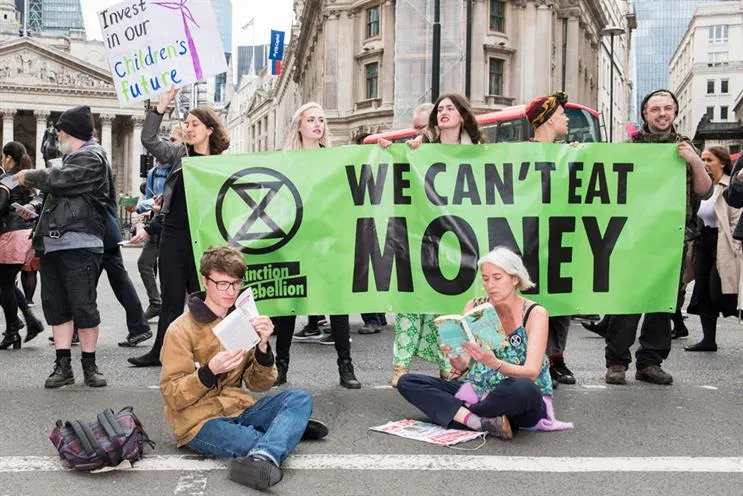 If the success of any brand depends on how well it understands culture, it is not an exaggeration to say that the success of lifestyle brands is entirely dependent on their ability to become part of the cultural moment.

But what is Gen Z’s State of the Generation?

If you spent your early teenage years during the 90s and the first CD you owned was from Nirvana, Pearl Jam or Oasis, you are a Millennial. If you were already clubbing during the 90s you are a Gen Xer. If all of these sounds like stuff people younger than you were doing, then you are a Baby Boomer and I thank you Sir or Madam for taking the time to read this article.

But the 90s are not just the decade in which Millennials came of age, they also were a transformative decade in advertising: the Super Bowl Commercial break truly came to life during that period, as well as the positioning of the TVC as the most effective way to build a brand. TV ads first aired much earlier than that, but the explosion of cable TV and of the idea of commercials as forms of entertainment are all inventions of the 90s–if you wanna read more about all this I recommend Ken Auletta’s Frenemies.

A resurgence of Purpose, Audiences grounded on Intersectionality and a 360 approach to media have come as a result of the cultural shift brought on by Gen Z.

Getting back on track though, why does this matter here? It matters, because most of what Millennials and Gen Xers in the industry know about brands today was the result of a childhood spent in front of a TV and of the indelible mark left behind by brands such as Diesel, Oakley, Perry-Ellis or Airwalk. In other words, the idea of a lifestyle brand, which today is king, was, like many Gen Zers, born in the 90s.

Lifestyle, therefore, is not the result of deeply embedded biological needs, but rather the most cultural and temporary of concepts. If the success of any brand depends on how well it understands culture, then it is not an exaggeration to say that the success of lifestyle brands is entirely dependent on their ability to become part of the cultural moment. It was only until a couple of years ago that brands were still struggling to decipher that generation of awfully spoiled brats called Millennials. With barely any time to breath, brands face today another group of strange humans, who we decide to unimaginatively call Gen Z. 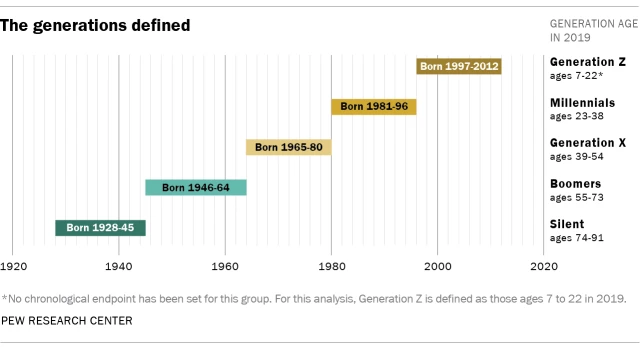 Given the importance of the 90s in the advertising industry and the fact that they were the formative years of Millennials and Gen Xers, we can see the decade as a pivotal era, which can be used as a frame of reference to understand Gen Z’s worldview.

The 90s introduced the cultural revolution to pop-culture, which is the underpinning of today’s lifestyle brand. To fully grasp this one must bear in mind the shift in the social conversation: culture makers were no longer preoccupied with the East vs West competition between values and way of life, focusing instead on giving meaning to that unbounded sense of progress and optimism that became the core of the decade’s narrative.

Fukuyama’s The End of History became the bible of CEOs, politicians, entrepreneurs, CMOs and advertisers throughout the 90s. Yet, its tenets of individualism and its unbounded optimism no longer inspire people.

90s unbounded optimism led to a general sense of anxiety around a simple question: is this it? In other words, if we have reached our peak, what is there left to fight for or care about?

The answer from Pop-culture was a frantic exploration of freedom and of new ways in which to challenge old rules. Movies like Natural Born Killers, Fight Club and Trainspotting are exemplar modes of criticism of this unbounded optimism, advocating instead for nihilism, systemic destruction and apathy. At the same time the Rainbow Revolution put tribalism and sub-culture at the core of how people defined their identity.

In advertising today, we don’t even blink before dividing social groups into smaller interest-based groups. Skaters, ravers, grungers, altos, preppies and many others became the signature of an age where identities became a thing you chose for, rather than conform to. This same fight for new identities opened the door for the LGTBQ+ movement to become incorporated within Pop-culture and advertising–in 1994 Ikea aired the first TVC featuring a gay couple.

It was not all progress though. The 90s saw the birth of the Supermodel in fashion and of unattainable beauty as the benchmark for women, and later men, in western societies and beyond. The use of models and celebrities to generate “aspiration” has been the to-go place of many lifestyle brands since. The idea of “Super” became the prime source of aspiration for self obsessed Millennials and is today present in many if not most advertising campaigns.

‘Ok Boomer’ or what is Gen Z so angry about?

Greta Thunberg is neither the first nor the most vocal advocate for Climate Justice, yet she has been unbelievably successful in catching everyone’s attention: “why is a 16 year-old so angry?

The truth is that most adults don’t really get it; her parents have been accused of using her as a puppet, her autism has been used to dismiss her, as psychologically unstable, and even other activists have refused to see her as the face of a movement they have tried to lead for years. Yet, I think Greta is worth mentioning because she exemplifies the Zeitgeist that has shaped Gen Z.

While most (highly-educated) boomers emerged unscathed from the Great recession of 2008 many Millennials did not, and it seemed that no one except for Gen Zers paid as much attention to the impact that economic anxiety and broken dreams had on them.

Economic hardship was of course not the only source of anxiety Gen Zers grew up with: the inability or indifference to take action on Climate Change, on white-male dominated boardrooms, police shootings in the US, the sexist behaviors causing the Metoo and Times up movements, whitewashing, greenwashing and pinkwashing, all add up to an image of the world that is much more brutal than what Millennials grew up with in the 90s. What emerges is, no doubt, a very different set of values from what lifestyle brands thought made them culturally relevant.

Gen Z, we are often told, is akin to activism and political action. This is certainly the case, but not the whole story. The common mistake here is to reduce activism to protest marches alone. Instead, we need to understand their activism as a much broader form of social critique and as part of a worldview. This is precisely what lifestyle brands need to get right today if they want to resonate with Gen Z pop-culture.

Get woke! This is the mantra of Gen Z and it’s a call for the complete reformation of all spaces of interaction, where mindfulness replaces being down-to-earth yet aware of the bottom-line, as the main premise of brand building.

Gen Z’s activism is also not particularly pessimistic; their calls for change are not defeatist and they can be better characterised as Optimistic Rebels. 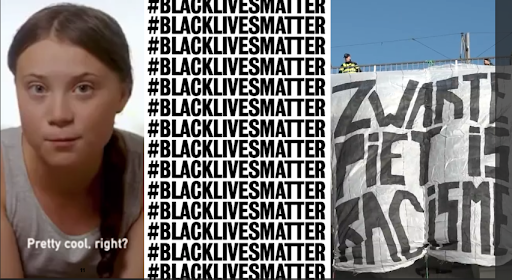 From left to right, Greta Thunberg, The Black Lives Matter hashtag which was one of the most popular ones in 2018 and a banner from Anti-Zwarte Piet protesters in Rotterdam

If you’re still reading and want to go further, this activism can be translated by brands by paying special attention to 3 key components: Purpose, Audiences grounded on Intersectionality and a 360 approach to communications.

Take Purpose seriously: forget about getting away with murder

A lot has been said about purpose. Both retractors and supporters have been battling it out for a long time. The truth is that, when it comes to Gen Z, brand purpose has been making an incredibly strong comeback and has proven to be a very effective marketing tool (read more on this here).

The problem faced by many company leaders is that they can’t help but be cynical about it. They are unable to get over the 90s mantra “It’s the economy stupid”. Anyone who blindly believes that people act only motivated by their bottom-line has just not been paying attention. A bold purpose being communicated proudly can help a brand build a loyal following of Gen Zers. Although, if you simply can’t commit to being bold then the second best option is to be as honest as possible about what you stand for; Gen Z still prefers honesty over nice sounding words.

Intersectionality is the new grounding of target audiences and personas

Intersectionality has a strong sociological foundation which is a bit too complex to address in full in this article (but you can read more about it here). Its main lessons for audience building are that the need for brands to understand that interests and behavior are a much better descriptor of identity than demographics, as well as a better predictor of the relationship between identity and purchase decision.

Grouping people according to their ethnicity or their gender is therefore a useless exercise; not only for reasons of political correctness, but because such groupings presume that people, instead of playing an active role in defining their identity (and their lifestyle), would actually follow or ascribe to given identities. The latter approach is used then used to say that demographics determine lifestyle, which is counter to where the science is today.

Clever 360 instead of omnichannel

I think that by now most brands are aware (some painfully aware) that the omnichannel strategy of the early 2010s no longer works. Too many brands have become a content factory and people have reached their attention limit–there are simply not enough hours in the day for them to remain connected.

This means that “being where the consumer is” is today an underwhelming approach to digital and surely not the best way to connect with the audience that spends most of its time online. Instead, brands need to choose those channels where they can make a difference; channels preferred by their audience, channels where the business opportunity is greater and where they can publish content that will surpass anything the competition can throw back at them.

So, there you have it. You are now a master of capturing the cultural moment and the Gen Zers within that culture–well maybe not a master, but you know something and that is surely better than being clueless. I am fully aware that applying those 3 key elements is easier said than done, but in an industry where a Creative Director’s gut feeling so often trumps everything else, rest assure this is your best argument to get ahead in the game.