How the Dutch (re)took Manhattan 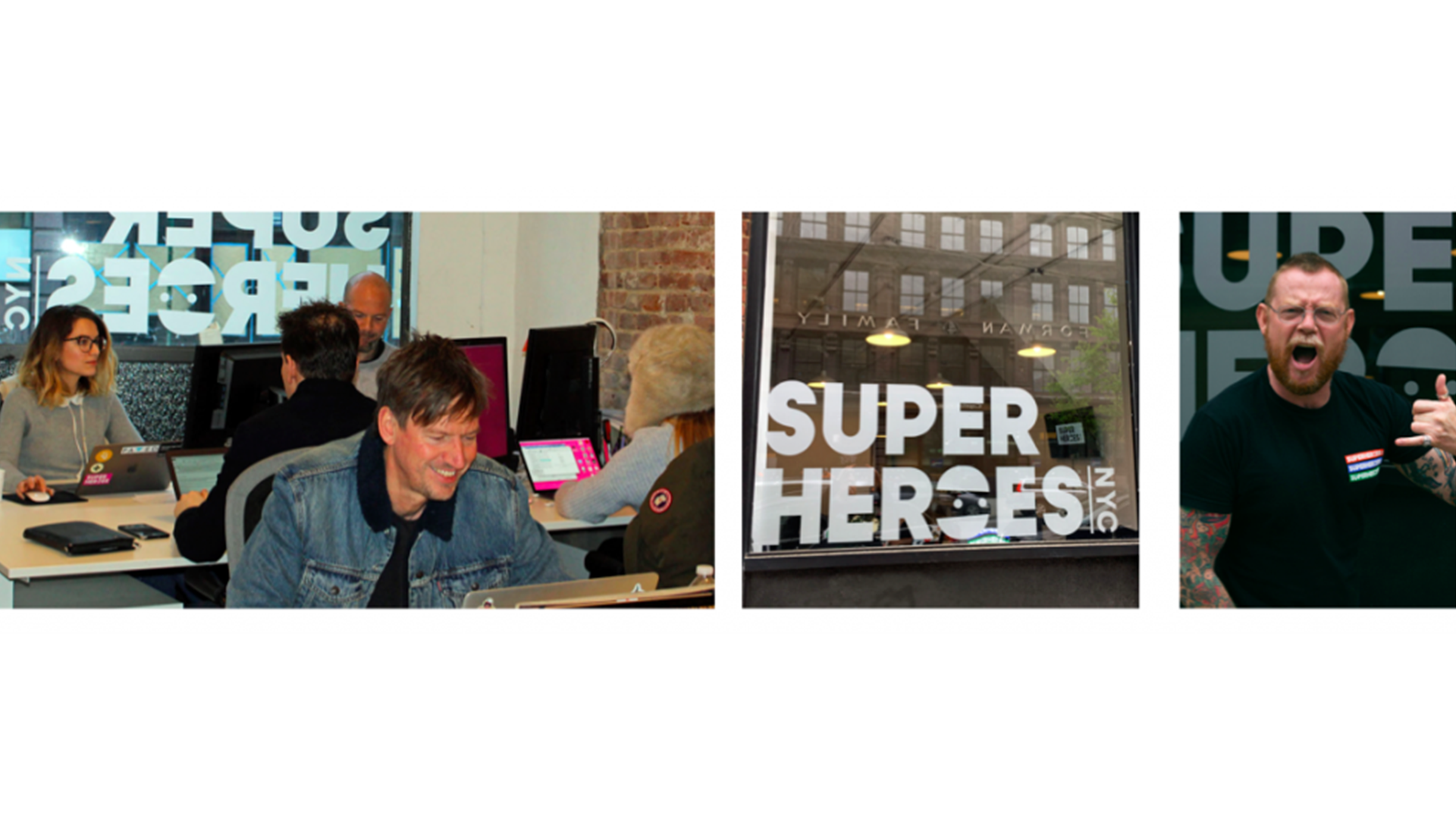 “Window dressing, fake it ’til you make it. It’s more or less a necessary evil,” confesses Rob Zuurbier, managing partner at SuperHeroes New York. “We might be confident that we can handle an account, and on our website we’re showcasing great work for global A-List clients, but that doesn’t necessarily impress anyone here in NYC.”

When a client brings their whole marketing team to your office, he points out, they want to see that you have a big, trustworthy operation. But at first, SuperHeroes was based in a shared workspace in Brooklyn with a bunch of start ups.

“So we rebranded the whole space SuperHeroes New York, from the front door, to the kitchen, to the meeting rooms. I then ‘promoted’ every other company to temporary SuperHeroes. The guy building websites three desks down became my creative director and the lawyer down the hall my CFO. It worked, we had a great meeting, the client felt confident and we landed the account.”

Rob remembers roaring home on his motorcycle that day with the Manhattan skyline to his right, thinking: “Yesss, we are actually doing this here in NYC!”

The three members of the SuperHeroes management team all see their New York adventure from slightly different perspectives. For co-founder and ECD Rogier Vijverberg, who started his career at Young & Rubicam, it has a definite romantic appeal. “Sinatra. It’s in my head, I can’t help it: ‘If you can make it here…’”

Django Weisz Blanchetta, managing director of the Amsterdam office, sees it as the ultimate test of entrepreneurship. “Establishing a viable agency in the Netherlands already commands a great deal of respect. But New York? Starting from here, in Amsterdam, with a different language and culture? You can’t help but wonder: Is it possible? Can we pull it off? Will it be fun?”

Zuurbier, who built his career within the Dentsu Aegis network, already had a sweet gig at 360i in New York. But he says: “I was ready to be more of an entrepreneur, more independent, less politics. I wanted to dive into this adventure with these guys and build something from the ground up. I knew I would be dropping in salary and perks quite heavily, but I honestly thought we’d be up, running and killing it in no time. That was a bit of a miscalculation.”

The US industry press reacted to the SuperHeroes NY office with headlines such as: “Can an Independent Amsterdam Agency Tame Gotham’s Many Challenges?” and “Expanding into New York is no stroll down Broadway.”

Almost three years in, Zuurbier can confirm that. Funding, he says, was the first challenge. “A decent creative team will cost you north of $300K a year here, and you want multiple teams, obviously, so do the math. Then you’re going to need strategists, account people, producers, media specialists and so on. You want to move on from the ‘one man and a desk’ phase as soon as humanly possible.”

Also, he says, the New York agency didn’t want to become a local agent for the Amsterdam office. It had to be self-sustaining. “But if you don’t have a couple of million at your disposal, and you need to earn every dollar before you can spend it, then you have to hustle, hustle and hustle some more. Hit up those new business leads and do everything you can to bring them in.”

As he points out, the industry in the US moves at 100 miles an hour. Loyalty depends on results. You can present your best work on your best day and you’re lucky if you get a polite no. “This city will eat you alive if you can’t deliver,” Zuurbier says.

But delivering depends on talent. And, as Weisz Blanchetta observes: “Talent comes at a price.” It’s also working at competing agencies when you arrive. “So you’re always going to be a bit thin at the beginning. You want to scale up as quickly as possible.”

Despite the fact that this city was once called New Amsterdam, there are cultural differences. A major one is between Dutch frankness and American tact. According to Zuurbier: “If an American says ‘very interesting’ he means he doesn’t like it much. If he says, ‘I’m sure it’s my fault’, he means, ‘You messed up.’ So you need to be on your toes.”

Then there are the usual bumps in the road: clients who pull out at the last minute, others who can’t decide, still more who baulk at a brilliant idea in favour of a safer concept.

For one tech giant, the agency made a film whose goal was to juxtapose the product’s authenticity with the “fakeness” we’re confronted with every day. Vijverberg says: “It was a great campaign and it would have been hugely successful. But in the end the client didn’t dare to run it.”

Bad for agency morale, not to mention a missed opportunity to generate spin-off clients from the buzz around the campaign. “That hurts.”

All these stories are reluctantly told. After all, dwelling on the negative will set you up for failure. But the rationale behind the New York adventure was and remains positive: it will bring growth to SuperHeroes. “In our business the US is still a major trendsetter: what happens there happens in Europe a year later,” says Weisz Blanchetta.

One example of a US learning is the use of a concept called “Long Ideas and Sequential Storytelling”, which is also being implemented among European and Asian clients. The method is comparable to the way TV series are being made. The idea is not to make one big tent-pole commercial that’s shown on a loop, but a number of connected short stories, all with different storylines, expressed across many platforms.

“This is a completely logical format to us,” says Vijverberg, “especially when you look at our motto: ‘Saving the world from boring advertising.’ It forces us to think much more deeply about how the various content pieces can add up and enforce the core message.”

“Free Thinking” sessions are another concept born in New York. Creatives and strategists are given time to come up with concepts independent of any brief. The best ideas are matched to relevant brands, products or services, and only then are potential clients approached. “It’s also the perfect way to keep positive energy flowing,” says Zuurbier. “Setback? Alright guys, let’s do a session and keep on acquiring.”

But the setbacks are becoming scarcer. A big advantage when opening the NY office was that Amsterdam had already worked in the US for big clients like LG, Converse and ASUS. But SuperHeroes also brought a crucial differentiator with it: the agency was known as digitally disruptive and slightly irreverent.

Adweek upped the ante by placing SuperHeroes on its list of The Most Engaging Brand Content Makers. And then the founding trio’s core plan began to fall into place: more international clients started waking up and noticing them. Suddenly – boom! –an out of the blue call from Dubai.

Zuurbier: “Did we want to pitch agency of record for the Dubai Tourism Board?  An extremely complicated multi-million dollar account aiming for Asia, Africa and the Middle East. 14 markets, 9 languages, 12 industries and three audience subgroups per industry. Pitching for two months straight against mostly big network agencies.”

“This confirms the gut feeling we’ve had since starting this crazy journey. We made the right call. So far, it’s totally been worth the fight.”

Gijs de Swarte is a Dutch journalist, writer and filmmaker. He worked in New York for a number of years.