SuperHeroes wins at the Webby Awards! 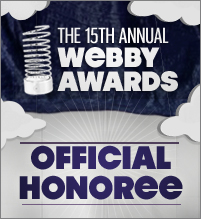 We’re pretty darn happy to announce that two of our projects, Vodafone Lucky Calls and Rivella Kicks & Thrills have been awarded as official Honorees from the Webby Awards 2011.

The Webby? Yes! the Webby is the Internet’s most respected symbol of success and recognition that puts us in the esteemed group of industry leaders such as Google, Facebook, Twitter, TED.com, or NASA. Pretty cool, huh? 🙂 And what the heck is an Official Honoree? you might be asking yourself now. Well, you’ll be happy to hear that it’s a precious diploma gifted to the best submissions of The Webby Awards, just a little 10% among the 10,000 entries over 60 countries worldwide. High five!