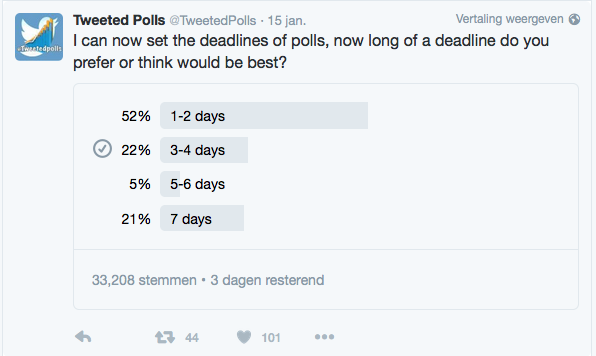 Twitter recently launched a new feature called ‘Twitter poll’, allowing brands to ask followers a question and give them two, three or four options to vote for. Only after you’ve voted, you can see how others have answered. When the inquiry is over, Twitter sends you a push notification with the results.

Would you rather travel 10 years in the

Up till January 15th a poll could only be ‘live’ for 24 hours. Now you can set the duration of the poll yourself, with a max of 7 days. According to Twitter, the poll feature has been a huge success, with 1.7 billion votes being cast across user polls over the past few months.

Why the success?
The mechanism is simple: ask a question and formulate the fixed answers. The copy has the same limit as a normal tweet, and you can add a link if needed. You cannot add a visual (yet). For the follower the threshold for responding is very low (anonymous) and yes, of course it makes you want to see the results (so, do you answer the same as the majority?)

What to use it for?

Can’t decide what to wear to a party next Friday? Ask your Twitter followers in a poll. Need to select the best fitting title for your next blog post? Create a poll, your followers will give you the best advice. Want to know if people rather buy your product in store or online? Ask them in a poll. Of course it would be great to have as many answers as possible, so the results will give you a plausible answer. Tip: add a funny twist, or just use great copy, fire up the curiosity-factor and then people will retweet it to expand your reach.

If an advertiser wants to use the poll to engage with certain target groups on Twitter, there’s a few options Twitter gives you. You can set up the poll as normally and promote this Tweet. Second option is to use the Voting Card (for which a minimum spending budget is needed). This Voting Card is not new though, and several brands used it: 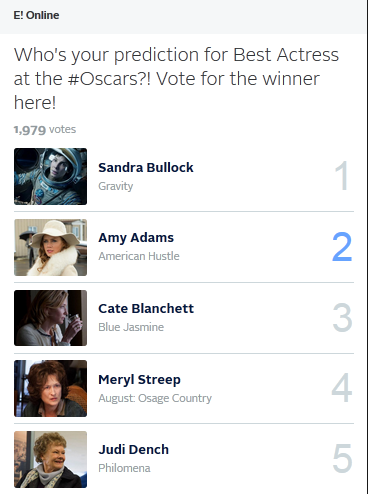 For our client ING (retail banking) we’ve used this feature as well. “Financially Fit” is an inspirational section on the ING website with all kinds of tools for people when looking for information about mortgage issues, money saving or retirement. To give these tools more awareness within the target group, we used the Twitter poll, amongst other social tools. 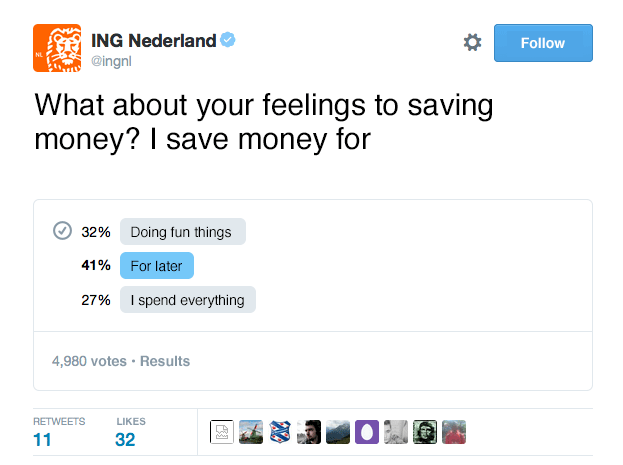 Engagement for this tweet was 1,43%, which is pretty high. Even without the votes included in the ER calculation.   When we asked Twitter about this, Ashley Vinson (Twitter Inc.) says: “YES votes on an organic voting poll on Twitter DO count towards engagement rate now!”  So want to increase your average ER? Use a poll! 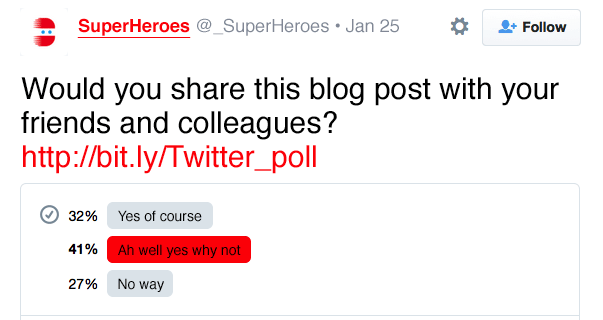 We think the poll is a great way of interacting with the audience and ideal for collecting a good amount of data from your followers.